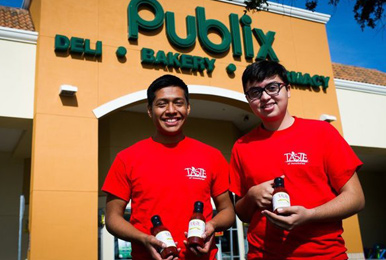 The salsa, spice mixes and sauces created and sold by Immokalee High School students have reached the aisles of 18 Publix grocery stores in Collier County.

That’s a big distribution leap for the products of Taste of Immokalee, a company created by the students with the help of One By One Leadership Foundation. The project’s goal has been to attract economic development to the community and provide scholarships to its students.

Until recently, the products, based on recipes that Immokalee families serve at their tables, could be found in 14 locations in Collier County, including the Immokalee Winn-Dixie store, in addition to the cafeterias of the district schools.

Students took their display racks to 18 Publix stores in Collier County on Saturday and filled them with the products.

“It’s a very big step for us, especially since we have only been around for one year,” said Eric Garcia, a 17-year-old senior at Immokalee High.

Garcia, who wants to study business management and entrepreneurship, said they have been offered more than 50 Publix stores in Collier and Lee counties to display their products. But students decided on 18 because they don’t have enough products.

Marie Capita, who mentors the students and is the executive director of the company, said it was also logistically difficult for them to take the racks to all the stores at once. They are planning to set the racks in the other stores next month, Capita said.

“Getting into Publix is not the hard part,” she said. “The hard part is getting the products out of Publix.”

If shoppers don’t pick the products, Capita said, Publix won’t order more. And to encourage consumers to choose their sauces over better-known brands, they need to put more effort in marketing. The challenge, she said, is to find funds for promotion. They welcome mentors who can teach the students about effective marketing, she said.

The students wanted to get into Publix, she said, but now, they are seeing that there are many costs associated with being there. Their profit margin, she said, is also lower when they sell in Publix.

“Business is a risk,” Capita said. “That’s the main thing they are learning.”

Garcia said Publix gives them the chance to reach more consumers. Now, he says students want to produce a commercial for TV and social media to tell their story to more people.

“I am cautious,” he said of their entrance in Publix. “It can go anywhere.”

Christopher Bances, 18 and president of the junior board of directors, said they are hoping to sell about three cases of their products in each store each week. Their products, he said, are doing very well at Winn Dixie’s Immokalee store.

The products will have new, more modern labels, and packaging for the spices mix will be smaller, so buyers are more likely to use before it expires.

Bances said they are also looking for ways to get into Whole Foods, and Capita is training 24 new students who are joining their project.

Capita said they will know soon where they are in terms of profit, when the accountant finishes work in their first year account. She estimates they have sold about $27,000 or more so far. She says the students get paid for most of the work they do, when for example, they intern in summer or work as “sales consultants,” although sometimes they volunteer. That way, she says, they get real-life experience of work. Capita’s position is also paid, but the other mentors are volunteers.

Although the company is currently getting their products bottled in Sarasota and North Carolina, its goal is to be able to manufacture them in Immokalee to create jobs and distribute the company profits in scholarships for Immokalee students.